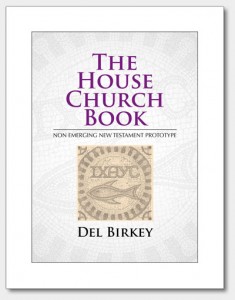 The House Church Book: Non Emerging New Testament Prototype by author Del Birkey has been completed posthumously after Del Birkey passed away unexpectedly on May 13, 2009 and is now available online for purchase and download as a digital eBook in PDF format.

Those interested in this critically important topic may have recently become aware of another book by the same title: “The House Church Book,” but with a different subtitle: Rediscover the Dynamic, Organic, Relational, Viral Community Jesus Started – by Wolfgang Simson, a German church developer and strategist.

This book is being offered through the Barna Group, with a Foreword by George Barna.

His [Wolfgang Simson] new book refocuses our attention on the original mission, strategy and biblical nature of the church in easy-to-read but thought-provoking ways. He advocates a high quality, organic structure, reproducing model that relies on the power of God rather than man’s techniques, and gives hands-on guidance toward developing such churches.

We at TheHouseChurchBook.com have ordered a copy of Wolfgang’s book and will review it here as soon as possible. In the meantime we are pleased about the elevated interest in this often overlooked, under-studied and widely misunderstood topic. To the extent that Wolfgang’s book delivers on the description, and helps to clarify, educate regarding truth and promote biblical understanding, we would recommend purchasing both books for a fuller picture on the topic.

The two books contain some similar content, yet at the same time are very different. Both authors are passionate about the house church structure. While Birkey views the structure as a means of renewing the church and urges its use, Simson presents urgency for a complete paradigm shift on the part of the worldwide church. Birkey plumbs the depths of the New Testament, exegeting how those first house churches formed and functioned, in order to gain insight for churches today. He offers some useful suggestions, but his main contribution is the detailed study of the first-century house churches as found in scripture. Birkey concludes with an explanation of his sub-title Non Emerging New Testament Prototype by reviewing the emergent church of today against the foundational basics of the New Testament churches.

Meanwhile, Simson makes it clear that his book is not intended to provide an extensive exegetical study of the house churches in Scripture. Following his preface Simson incudes a section titled 15 Theses toward a Re-Incarnation of Church, in which he suggests we are entering a third Reformation. First, Luther brought about a reformation of theology. This was followed by a second, pietistic renewal that led to a reformation of spirituality; and third, God is now touching the wineskins to bring about a reformation of structure. Both authors agree there are great advantages to the house church structure.

Simson writes from his background in church growth and mission strategy and his later research in the same field. As a strategist, in this book he outlines his belief there must be a paradigm shift in Christianity to the house church structure (in order to build the church as Christ’s body that will take the gospel to the ends of the earth) and that it is beginning even now. He makes this case in the first five chapters.

In Chapters 6 to 11 Simson outlines his view of how to make this paradigm shift happen. He talks about the struggles of change; about QSQ—think Quality, Structure, and Quantity; and church multiplication.

A requisite five-fold ministry for the functioning of house churches is detailed, taken from Eph 4:11-13. Despite the prevailing view that pastor and teacher are one and the same gift, an (expanded beyond scripture) description of function is given to each of the words: pastor, prophet, apostle, teacher, evangelist—in that order.

Simson includes his thoughts on a number of relevant house church topics: